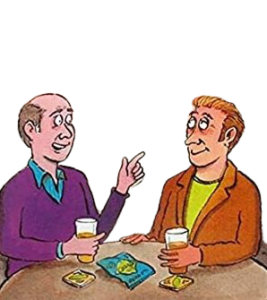 A man decides to buy a pub He is retiring and wants to get one with some regulars and a stabilised menu.

Luckily, an old pub owner is wishing to retire in the countryside and offers him his old business.

The old owner shows him the pantry, the basement, the beer taps and the kitchen, teaches him how to operate the old pinball machines and how to draft the beer the proper way.

Finally, the old owner tells him about the regulars, who leaves good tips, who tries to bargain the price, who will be hard to deal with.

“And one last thing, as you saw, there is a Institute for the deaf in front of the pub, so most Friday nights they come over to unwind.

They are a timid bunch who keep to themselves, but it’s not hard to communicate. If they show you their index finger, they want another pint.

If they show their open palm, they want to close the tab. You’ll get the hang of it in no time. Nonetheless, here is my number, if something happens you can call me”

The first week passes smoothly, the new owner handles everything fine and the business is as great as he could wish for. Finally, Friday comes and he meets the group of deaf men.

Each one raises an index finger and he serves them a pint each. They really kept to themselves, playing in the pinball machines or watching the game on the telly.

From time to time one comes over and shows him an index finger, getting a beer in return. The new lender finds them timid but cheery and no problem to handle.

After some ours, he notices them acting strangely. They open their mouths wide, and flail their arms in erratic fashion while moving from side to side.

He is stumped at what that could mean. It’s not an index finger for another pint, nor is the open hand for the bill.

The man finally caves in and calls the old owner.

“What’s the problem my boy? Are the patrons treating you right?”

“Everything is fine, thank you! But today I met the deaf guys and, well, it was easy to understand they at first”

“Didn’t I tell you? They are a great bunch!”

“Yes, but now they are opening their mouths and flailing their arms, going from side to side! What the hell does it mean?”

“Oh, forgot to tell ya. When they start to sing, it goes until the morning!”

A man and woman boarded an air plane

A three spy sent to the USSR