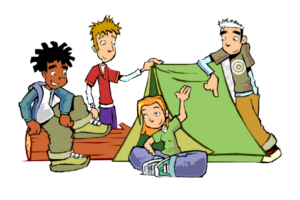 They’re sitting around a campfire drinking and drinking.

They go out and kill a deer, they bring it back to clean and gut it. They drink some more.

A little while later one of the guys stands up, and says, “I’ve got to take a .”

So he goes off into the woods but doesn’t come back for a while.

His friends go to check up on him and find him passed out in his . So just to mess with him they spread the intestines of the deer around him.

They go back to the campfire and drink some more.

Some time goes by and finally their friend comes out of the woods white as a ghost, he said “guys,

I  so hard my intestines came out! But by the grace of god and these two fingers I got them shoved right back up!”

The girl students class in unison

A guy on a beach near the edge