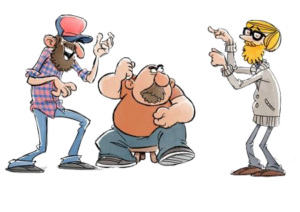 Three men survive a plane crash in the jungle.Paddy, an Irishman, Jock, a Scotsman, and Edward, an Englishman.

The three men band together and set off in search of civilisation.

After many hours trekking through the jungle the men come across 3 rotting dead birds.

Paddy however shrugged and said “beggars can’t be choosers lads!” And devoured the lot.

After several more hours of trudging through the jungle the men find a nest full of human eyeballs.

Edward dry heaves while a shocked Jock proclaims “some bird must have collected them from the dead in the crash” and says a quiet prayer.

Paddy however, completely unperturbed, grabbed a handful and gobbled them right up, “well they’re not using them now!” He said.

The men carry on their search for aid through the jungle and suddenly hear the sound of running water.

Elated, a parched Edward and Jock rush towards the sound.

Paddy however, rubs his belly thinking he’s getting hungry again, strolls casually behind.

He follows the men and comes across Jock kneeling beside a river consoling a screaming Edward.

“What’s happened here!?” Asks Paddy. “Edward went to take a drink from the river! But as soon as he put his hands in a piranha latched onto his finger and bit it off!” Cries Jock.

Looking around, Paddy sees the fish flopping around on the ground.

He walks over, picks up a rock and cracks it over the head.

Then without missing a beat he devours the whole thing! ” Screams Edward.

“My finger was in there!” “Sure I thought it was a bit chewy.” Chuckled Paddy.

Then all of a sudden a jeep burst through the brush with “RED CROSS” plastered across the side of it.

Medics jumped out and ran across to tend to the three men.

Patching up Edward’s hand, and treating other wounds on them.

“Alright. Let’s get out of here” said the medic in charge.

“You guys must be starving, there’s some food in the jeep!” Jock and Edward begin to cry with delight, thanking the medics.

Paddy however shrugs again and says “No thanks there. I’m stuffed. Good jungle this. I had Birds Eye Fish Fingers!”

A man is walking down the street