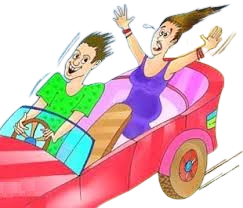 A married couple is driving along the highway doing a steady forty miles per hour.

The wife is behind the wheel.

Her husband abruptly looks across at her, speaking in a clear voice, and says,

“Darling, I know we’ve been married for twenty years, but I want a divorce.”

The wife says nothing, keeping her eyes on the road ahead but slowly increases her speed to 45 mph.

The husband speaks again, saying this time, “I don’t want you to try and talk me out of it, because I’ve been having an affair with your best friend, and she’s a far better lover than you.”

Again the wife stays quiet, but grips the steering wheel more tightly and slowly increases the speed to 55.

He pushes his luck. “I want the house,” he demands.

The car slowly begins veering towards a massive concrete bridge.

This makes him a wee bit nervous, so he asks her, “Isn’t there anything you want?”

At last the wife replies in a quiet and controlled voice.

“Oh, really?” he inquires, “So what exactly have you got?

Just before they slam into the wall at 80 mph, the wife turns to him and smiles, “The airbag.”

A serious drunk walked into a bar

Interview of a Married Man