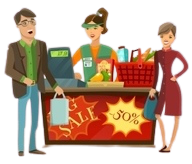 A lemon, a potato, and a pea all had a tough week working at the grocery store so they decided to let off some steam with a bar crawl at the weekend.

They had a great time, hitting bar after bar, knocking back drinks, but being so genetically different, the alcohol affected them each in different ways:

the lemon got very acidic and ; the potato, being a big starchy chap, took the booze in his stride;

while the little pea reacted to all the sugar and started to get a touch hyperactive.

At the end of the night, the three friends found themselves leaving a bar at the top of a tall hill, when all of a sudden the pea started bouncing up and down excitedly:

“Lads! Lads! I’ve got a great idea! We’re all vaguely round in shape, let’s not get a cab home, let’s just roll down the hill!” and before the others could protest he was off – shooting down the hill at a rate of knots.

The lemon lurched after him, but soon started listing violently from side to side as he went, owing to his oval shape, which did nothing for his unsettled stomach.

With a sigh, the potato trundled along slowly behind.

By the time the potato had bounced his way to the bottom of the hill, the lemon was spewing lemon juice all over the pavement, but the pea was already jumping up and down again “that was great, that was great, let’s do it again!”.

The lemon was now chundering up pips with the acid, but the pea didn’t seem to care “Come on! let’s go again, that was great!”.

The potato turned to him and said “Easy peasy, lemon’s queasy.”

A young woman on a flight

It was a midnight journey on