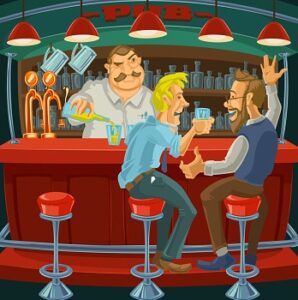 So naturally, they sat down at the bar and ordered a round.

Now, these guys are pretty  funny, and they know every joke in the book.

So as they’re enjoying their beer, of course, they’re cracking jokes with each other.

But since they know them so well, they started just referring to them by their number,

as it became tiresome to tell the same jokes all the time.

the guy at the end of the bar says while chuckling to himself.

All the other comics have a light laugh in response to this one.

another comedian says. This gets a stronger laugh, as it was the perfect follow up.

So on the night goes, cracking joke after joke to the amusement of the comedians.

Everyone was enjoying a good chuckle while they finished up their beers.

About to head home for the night, the comedian at the end grabs his jacket and stands up.

But before he heads out, he leans into the group and says,

The group loses it. Everyone keels over, dying from laughter. One comic almost fell off of his chair, he was laughing so hard.

Finally, when the laughter settles down, the bartender asked why that joke was so funny.

The comedians say, “well we’d never heard that one before!”

A couple of weeks ago I played golf

There is a large traffic jam