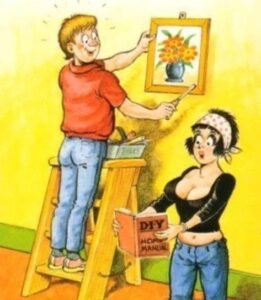 An Irish painter by the name of Murphy, while not a brilliant scholar, was a gifted portrait artist.

Over a short number of years, his fame grew and soon people from all over Ireland were coming to the town of Miltown in County Clare, to get him to paint their likenesses.

One day, a beautiful young English woman arrived at his house in a stretch limo and asked if he would paint her in the.

This being the first time anyone had made such a request he was a bit perturbed, particularly when the woman told him that money was no object; in fact, and she was willing to pay up to 10,000 pounds.

Not wanting to get into any marital strife, he asked her to wait while he went into the house to confer with Mary, his wife.

They talked much about the Rightness and Wrongness of it.

It was hard to make the decision but finally his wife agreed, on one condition.

In a few minutes he returned.

“T’would be me pleasure to paint yer portrait, missus,” he said “The wife says it’s okay.

“I’ll paint you in the all right; but I have to at least leave me socks on, so I have a place to wipe me brushes.”

A doctor goes to the same bar

Two little girls are playing on