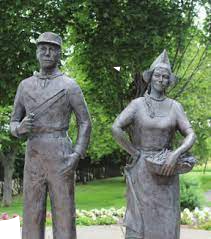 Warren Gatland and Eddie Jones are both killed when a lightning bolt hits the Millennium Stadium.

In heaven, they are greeted by God and Eddie is taken to his new home, a lovely English country cottage with statues of English rugby greats and angels singing Jerusalem and Swing Low, Sweet Chariot.

He was delighted until he suddenly heard some even more beautiful singing coming from the top of the hill, He listened closer and could hear Bread of Heaven and Hen.

He looked up to see a great palace with statues of Barry John and Gareth Edwards and a party in the garden had Brains SA flowing freely as the crowd watched Scott Gibbs scoring his try against England in 1999.

He went to the Lord and said: “I don’t want to appear ungrateful – but why does Warren get the huge mansion?”

A man and old horse an road accident