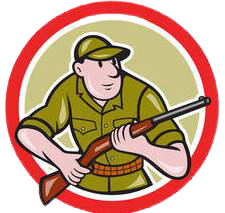 These generals definitely were impressed by what they saw!

An American, English and Russian general were having coffee together at the front in World War 2, arguing over who has the bravest soldiers.

The British general called one of his men over.“Private! See that Nazi tank in the minefield over there? Go destroy it.”

He ran across the unmarked minefield until within range of the tank with his anti-tank weapon, took aim and fired, destroying the tank, all the while under heavy fire from the enemy trenches.

“See, British soldiers are the bravest.” “That’s nothing,” said the Russian General. “Comrade! See that enemy soldier manning that machine gun there?

Run across the mines into the trenches and kill him with a knife.” “Da, Comrade General!”

The Russian soldier bravely charged across the minefield under heavy fire, jumped into the trenches, fought his way through many enemy soldiers.

He was then shot several times from the machine gun nest before reaching the soldier and knifing him to death after a bloody brawl. There’s nobody more brave than Russian soldier.”

The American general, unimpressed, said, “Let me show you all what real courage is.” He called one of his men over.

“Private! See that enemy command post over there? I want you to run undressed across the minefields, fight your way through the trenches, go to the command post and kill the commanding officer bare handed!”

Without hesitation, the American soldier flipped him the bird and said, “bang you, General.”

Lion And The Poor Slave

Who Is The Killer