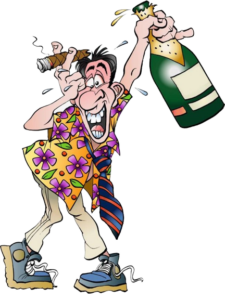 A man decided to change his life and for a start he took up the easiest – drinking.

He got so drunk with whisky and his breath had such a foul stench as if a whole herd of mammoths had spent the night in his mouth.

It felt good to be blind drunk, but the time came for him to go home and his wife was quite quick-tempered.

She always knew when he was drunk even if he was three blocks away from their house and did not let him in.

This is why the drunken man decided to use his cunning and break in the house.

He rang the bell for a long time and an angry voice hissed from within, “Who is it?”

The man leaned on the door and said tenderly, “I bring roses for the most beautiful woman in the world.”

Upon hearing that his wife was so moved that decided to open the door.

She opened it and took a close look at her husband.

Imagine her surprise when she saw neither roses, nor hyacinths in his hands.

“Where are the roses for the most beautiful woman in the world, you bastard?” the woman roared.

The man slouched towards her and murmured, “And where is the most beautiful woman in the world?”