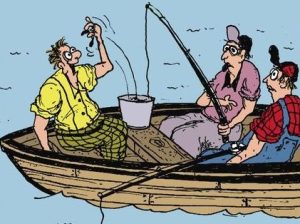 There was three guys that were fishing out in the ocean.

After a while of not catching anything,one guy yells,”I’ve got something!” so they all rush over and help pull it in.

They pulled for hours until inside the boat there was a Mermaid.

She pleaded with them to let her go and when they wouldn’t , she said, ” I’ll grant you each one wish if you let me go.

The first guy said, “Make me three times smarter than I already am”. a flash of light and then he started quoting Shakespeare perfectly.

The second guy seeing this said “Make me 10 times smarter”. a flash of light and then he figured out math problems that famous mathematicians had been pondering for years.

He didn’t listen to her and said, “Make me twenty times smarter”!

A flash of light and he turned into a woman.