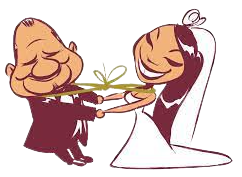 George decided to tie the knot with his long time girlfriend.

One evening, after the honeymoon, George and his new wife was organizing his golfing equipment.

His wife was standing nearby watching him.

After along period of silence she finally speaks, “Honey, I’ve been thinking, now that we’re married I think it’s time you quit golfing.

Maybe you should sell your clubs and golf cart.”

George gets this horrified look on his face.

George says, “There for a minute you were sounding like my ex-wife.”

“Ex wife” she screams! “I didn’t know you were married before!!!”