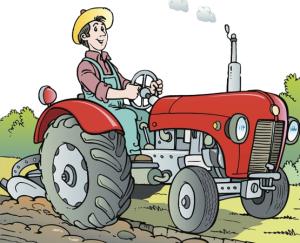 A young farmhand is driving around the farm and making repairs to the fences.

After a few minutes, he makes a call to his boss on the two-way radio and says, “Boss, I’ve got a problem.

I hit a pig on the road and he’s stuck in the bull-bars of the truck. He’s still wriggling. What should I do?”

“In the back of your truck there’s a shotgun.

Shoot the pig in the head and when he stops wriggling, you’ll be able to pull it out and throw it in a bush off the side of the road.”

The farm worker says okay and signs off. About 10 minutes later he radios back.

“Boss I did what you said. I shot the pig and dragged it out and threw it in a bush.”

“So what’s the problem now?” his Boss snapped.

“Well, the blue light on his motorcycle is still flashing!”