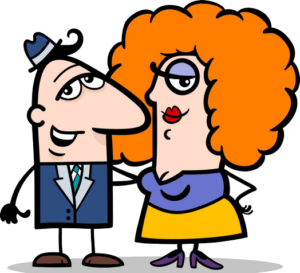 A woman came up behind her husband while he was enjoying his morning coffee and slapped him on the back of the head.

“I found a piece of paper in your pants pocket with the name ‘Marylou’ written on it,” she said, furious.

“You had better have an explanation.”

“Calm down, honey,” the man replied.

“Remember last week when I was at the dog track? That was the name of the dog I bet on.”‘

The next morning, his wife snack up on him and smacked him again.

“What was that for?” he complained.

A woman visits a fortuneteller

A husband and a wife were sleeping