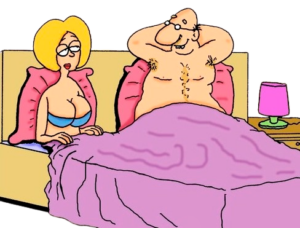 An old man and his wife have gone to bed.

After laying there a few minutes the old man farts and says,”Seven Points.”

His wife rolls over and says, “What in the world was that?”

After about five minutes the old man farts again and says, “Touchdown, I’m ahead 14 to 7!”

Not to be out done the wife rips another one and says, “Touchdown, tie score!”

Now the pressures on and the old man refuses to get beat by a woman so he strains real hard but to no avail.

Realizing a defeat is totally unacceptable he gives it everything he has but instead of farting he poops the bed.

The wife looks and says, “What the heck was that?”

A wife and husband were going home