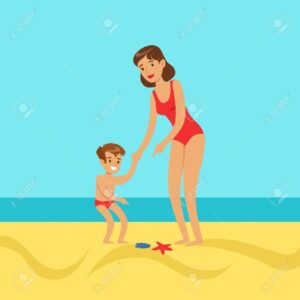 A mother and father took their 6-year-old son to a beach.

As the boy walked along the beach, he noticed that some of the ladies had bigger fronts than his mother’s, and asked her why.

She told her son, “The bigger they are the dumber the person is.”

The boy pleased with the answer, goes to play in the ocean but returns to tell his mother that many of the men have larger “units” than his dad.

His mother replied, “The bigger they are the dumber the person is.

” Again satisfied with this answer, the boy returns to the ocean to play.

Shortly after, the boy returned again. He promptly told his mother,

“Daddy is talking to the dumbest girl on the beach, and the longer he talks, the dumber he gets.

One evening a husband and wife were in bed

A woman goes out shopping with her husband