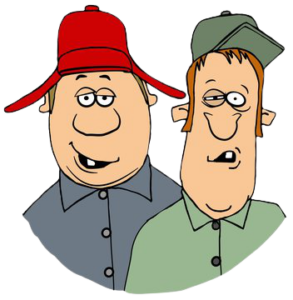 Two West  were out hunting, and as they were walking along, they came upon a huge hole in the ground.

They approached it and were amazed at its size. The first hunter said, “Wow, that’s some hole. I can’t even see the bottom. I wonder how deep it is.”

The second hunter said, “I don’t know. Let’s throw something down there, listen, and see how long it takes to hit bottom.”

The first hunter said, “Hey, there’s an old automobile gear box over there. Give me a hand and we’ll throw it in and see.” So they picked up the gear box, carried it over to the hole, counted one-two-three, and heaved it in.

They were standing there looking over the edge of the hole and listening when they heard a rustling behind them.

As they turned around, they saw a goat come crashing through the underbrush, run up to the hole, and, without hesitation, jump in head first.

While they were standing there staring at each other in amazement, they peered into the hole, trying to figure out what that was all about.Just then an old farmer sauntered up.

“Say there,” said the farmer, “you fellers didn’t happen to see my goat around here anywhere, did you?”

The first hunter said, “Funny you should ask. We were just standing here a minute ago, and a goat came running out of the bushes doing about a hundred miles an hour and jumped head first into this here ” he old farmer said, “Naw, that’s impossible. I had him chained to a gear box.”

Was This A Ghost

A man arriving home from work