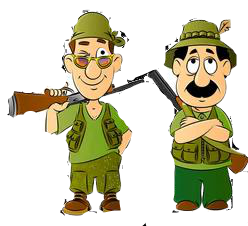 They stop at a gun shop to get all the gear they will need.

The clerk helping them out decided to have a little fun with the newbies.

CLERK: Best way to hunt a moose is in one of these female moose costumes. You both get in it, make a moose mating call, when the male moose shows up just unzip the suit and shoot him. Easy as that.

The two guys buy the costume and head out into the woods.

After both getting into the same moose costume the guy in back says, “OK, now start blowing that mating call thing the guy at the hunting store sold us”.

The guy up front blows and blows… about 5 minutes later they see the largest moose they have ever seen come walking up to them in their moose costume.

Guy in back says, “OK, now unzip the suit and lets shoot this thing”.

Guy up front says, “The zipper is stuck, I can’t get it open”.

Guy in back asks, “So, what the hell are we going to do?”

Guy in front says, “I’m going to lean over and start eating some grass, but if I were you, I’d brace myself”.

Will for an elaborate funeral

A local auction was proceeding furiously