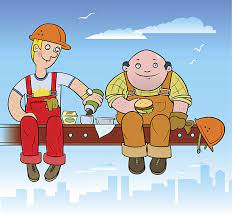 3 construction workers where sitting on the bridge that they where building having their lunch break.

The first guy says “If I get a vegimite sandwich again I am going to jump off this bridge”.

The second guys says “If get a peanut butter sandwich again I am going to jump off this bridge”.

The third guy says if I get another strawberry jam sandwich then I am going to jump off this bridge.”

The next day the first guy gets a vegimite sandwich, the second guy gets a peanut butter sandwich and the third guy gets a strawberry jam sandwich.

All 3 guys jump of the bridge and die.

The next day at their funerals the first wife says “If he just told me I would have given him a different sandwich.”

The second guys wife says “It is all my fault. If only I knew.”

The third wife says “I don’t get it, he makes his own lunch.”

Three men are outside Heaven’s gates

A husband got a message from his neighbour