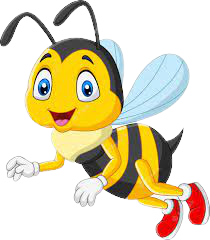 There was once a really smart bee.

Ever since he was little, he had always wanted more than the simple, boring lives led by his fellow bees.

After a few years, he left his job, his hive, and his family behind, in search of a better life.

He flew for hours until he came to a small Virginia town, on the edge of a forest.

He landed, and as he looked around, he saw a poster. It was a campaign ad for mayor.

The concept of elections were unknown to him, so he asked a woman who was walking by what it meant.

After realizing the concept of democracy was new to him, she explained all she knew.

He was fascinated by the concept that anyone could become a leader.

He settled down in that town, and got a job and a small house.

He got to know everyone in the town, gaining their trust and respect.

After a few years, he thought back to that election poster.

He had loved his new life so far, but he had always wanted more.

He felt he was well versed in the workings of human society, so he decided he would run for mayor.

And he won. He had a remarkable knack for politics, and he won by a landslide.

He served as mayor for 8 years, and he served his constituents well.

They loved him, and he would have easily won another term, but he had even higher aspirations.

He ran for a seat in the Senate, building an incredible staff and running persuasive, well-made advertisements on TV across the state.

And although this election wasn’t as easy as the one for mayor, he still won fairly comfortably.

As a senator, he represented his constituents with pride and dedication.

He helped fund projects to better the state’s infrastructure, and played a major part in creating major nationwide policies.

But even with all this success, he still wanted more.

He had his eyes set on the presidency.

He worked hard to get funding from interest groups and individual donors.

He worked harder than he ever had at anything, and his work payed off.

He became the first bee president of the United States.

The day after his election, he went back to the town where it had all started, receiving warm greetings from the people that had helped launch his political career in the first place.

He walked through the town with a sense of nostalgia, seeing where it had all started.

As he walked through the town center, he got a strange craving- for fruit punch.

He looked in the town’s only supermarket, and curiously, they were all sold out.

He didn’t mind much, though, and continued his walk through the town.

And a few minutes later, he saw a small stand, selling many drinks, including fruit punch! And as the bee walked closer, he discovered that there was no punch line.

A man’s at a restaurant in Spain

An old man and his Lamborghini