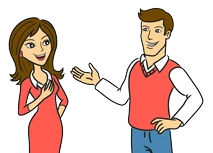 The young salesman finally plucked up the courage to tell his fiancee that he was breaking off their engagement so that he could marry another woman.

“Can she cook like I can?” asked the distraught fiancee

“Not even on her best day!” replied the salesman.

“Can she buy you expensive gifts like I do?”

“No, she’s broke”, the salesman said in agreement.

“Well then, is this all about ‘relations’?” cried out the devastated woman.

“No, nobody does it like you babe,” assured the salesman.

The salesman sighed, took a deep breath, looked his ex-fiancee straight in the eyes and said, “She can sue me for child support.”

And then it hit him… the four slice toaster he had bought for her the previous birthday.

The wealthy old gentleman and his wife

The wife starts to think