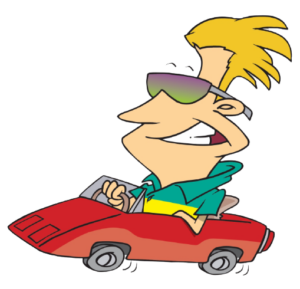 A state trooper running a speed trap flags a sedan for travelling 75MPH in a 50MPH zone.

The trooper immediately flips on his lights and stops the car.

“Do you know why I pulled you over?”, the trooper asks the driver as a matter of routine.

“It might be the six kilos of cocaine in the back seat.”, says the driver.

The officer is taken aback and doesn’t quite know how to respond.

“No sir, you were drive “Well, is it the loaded 9mm in the glove box?” The driver continues.

The trooper places his hand on his gun and radios for back up before saying, “Sir, I need you to-“ “Look, if it’s the dead body in the trunk, just come out and say it.”

The trooper draws his gun, orders the driver out of the car, handcuffs him, and places him in the back of his squad car just as back up arrives.

The trooper tells his back up of the situation and they begin a search of the vehicle.

No drugs are found in the back seat. The glove box contains only an insurance card.

The trunk is found only to have a spare tire and a roadside emergency kit.

Perplexed, the trooper and his colleagues suddenly hear from the squad car… I’ll bet that lying  told you I was speeding too!

Two guys are walking through