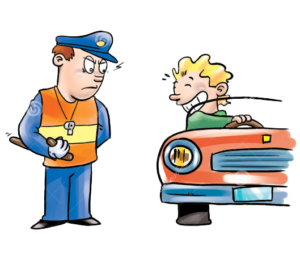 So this police officer is nearing the end of his shift and really pissed that he hasn’t caught anyone up to this point.

As he sits in his car and looks at the clock, this speeding car flies by so fast that the police cruiser rocks back and forth.

The police officer turns on his lights, hits the accelerator and launches after the speeding car.

When the car came to a stop, the officer gets out, pissed as hell.

As he’s walking to the car, he’s thinking that this poor souls is about to get it as they were well over 140 mph.

As he gets up the window he sees that this teenage boy is sitting in the drivers seat waiting.

The cop stares at the kid with this crazy mean face and says, “Son, I’ve been waiting for you all day…” To the cop’s surprise, the boy replies, “Well…I got here as fast as I could!”

At homes with my wife just