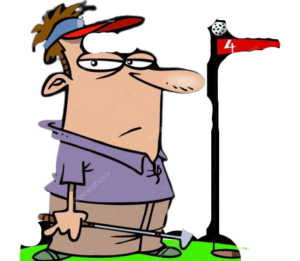 The Argentinean golfer Robert de Vincenzo went to the parking lot to get his car after having won an important tournament.

At that moment, a woman approached him. After congratulating him for his victory, she told him her son was at the edge of death and that she had no money to pay the hospital bills.

De Vincenzo immediately gave her part of the money he had won that afternoon.

A week later, at a lunch at the Professional Golf Association, he told this story to a couple of friends.

One of them asked him if the woman was blond with a small scar under her left eye.

De Vincenzo agreed “You were cheated,” his friend said.

“This woman is a swindler and is always telling the same story to all foreign golfers that show up here.”

“So there is no child at the edge of death?”

“Well, this was the best news I got this week!” said the golf player.