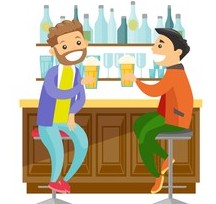 A younger man and his much older friend sit down for a drink at a bar.

This is great! Says the older man, I wish we had gotten around to this sooner.

I know, I know, says the younger man. The idea of getting a drink with you has just scared me a bit to be honest.

One of the last things I ever did with my dad was have a drink at the bar and he passed the next day!

Don’t you worry sport, I have plenty of life left in me!

Just then two of the absolute most gorgeous women either of them had ever seen walk in.

The old man takes one look and begins to feel light headed,

Are you okay! Exclaims the younger man, you’re hands have gotten clammy.

The two women look the way of the old man and wink.

The old man stumbles a step or two.

The young man, scared, rushes for a chair and gets the old man sat and situated.

You’re pale! You really have me worried I’m going to call an ambulance.

No that’s quite all right I’ll be okay.

The old man replies. Oh, I just have an erection!

I’m an authority on wasp sounds

A Scottish man had been working