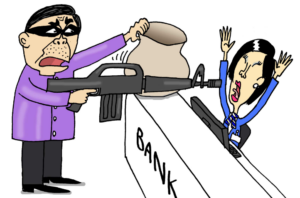 A man attempted to rob a Bank of America located in San Francisco.

He walked into the branch and wrote, “This it a stickup. Put all your many in this bag.”

While standing in line, waiting to give his note to the teller, he began to worry that someone had seen him write the note and might call the police before he reached the teller’s window.

So he left the Bank of America and crossed the street to Wells Fargo.

After waiting a few minutes in line, he handed his note to the Wells Fargo teller.

She read it and, surmising from his spelling errors that he wasn’t the brightest tool in the box, told him that she could not accept his stickup note because it was written on a Bank of America deposit slip and that he would either have to fill out a Wells Fargo deposit slip or go back to Bank of America.

He was arrested a few minutes later, as he was waiting in line back at the Bank of America.

A lady got a call from a bank

Two guys meet up in a bar