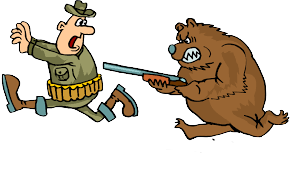 A hunter was in a tree with his muzzle loader when he sees a bear coming down the path.

He takes careful aim and fires. The smoke clears and he peers down at the path.

No bear! The hunter feels a tap on his shoulder, looks behind him and sees the bear.

“I don’t believe you” responded the bear.

Without another word, the bear throws the hunter over the branch and proceeds to bang the hell out of him.

The next day the hunter brought his AR-15.

He climbed up the same tree and waited. Sure enough, here came the bear.

The hunter lets fly with a dozen rounds.

The hunter slowly looked around at the bear.

Without waiting for another word, the bear throws the hunter over a tree limb and proceeds to bang him again.

The next day the hunter borrows a BAR from a friend.

He climbs into the tree and waits. The bear arrives and the hunter empties the clip.

The bear says, “You really aren’t here for the hunting, are you?”

An American and a Nigerian are sitting

Coming out as a retributive