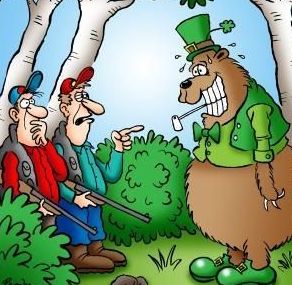 A newbee hunter asked a experienced old hunter how to hunt bears .

The old man answered:” It is easy, my son. I’ve hunted hundreds of bears in my life.

You just need to grab your gun and take a ride to some mountains nearby.

First, find a cave or stone cavern that might shelter a bear.

Second, make some ‘Woo! Woo!’ sound so that the bear inside would mistake it as a signal of its companion.

It would also produce that same sound as a feedback. After it comes out, you just pull the trigger. Easy?

” The new bee nodded and exited without coming back for months.

After a long time, the old hunter saw that new bee on a street and found him crippled, with an ear lost and an eye blind.

He asked him what happened. The new bee says:” I did as what you told me before.

But god  it, when something inside that cavern answered my ‘Woo! Woo!’, I didn’t expect a train would come out and hit me!”

PS: I saw this one days ago and translated it from Chinese to English. Might be some grammar errors.