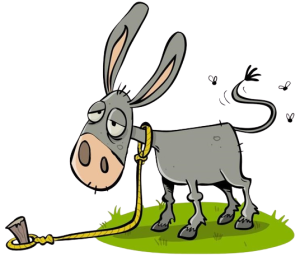 A donkey was tied to a tree.

A demon came and released it.

The donkey entered the field of a farmer and began to eat everything.

The farmer’s wife saw the donkey and was afraid that he would destroy the farm, took the rifle and killed him.

The donkey’s owner saw the dead donkey, got angry and also took his rifle and fired at the woman, killing her.

When the farmer got home and saw that his wife was dead, he killed the donkey’s owner.

The farmer in retaliation killed them.

When they asked the demon what he had done, he said: “I did nothing, I just released the donkey.”

Do you get it?

The devil doesn’t have the power to do much, but one simple thing he does triggers the evil intents of men’s hearts to harm one another.

So, let’s think before seeking revenge! Be careful with your heart, because many times, the only thing the devil does is “release the donkey”.

So don’t be fooled into fighting people, do the simple thing “with love tie back the donkey” and the devil is disarmed.

A chicken farmer went to a local bar

Two young lovers go up to the mountains