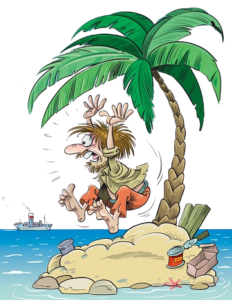 A young fellow became marooned on a deserted South Pacific island after his cruise ship sank.

For several years, he managed to live on fruits and vegetables he found on the island, together with shellfish and an occasional fish he was able to catch.

Then, one day as he was sitting on the beach, he saw an object approaching the island.

As it got closer, he could see that it was a woman astride a barrel.

When she finally managed to paddle the barrel ashore, he ran over to greet her, and noticed that she was a beautiful girl.

Noticing that his clothes were gone and he had quite a beard, she asked, “My goodness, how long have you been here by yourself?”

She said “Well, I’m going to give you something you haven’t had in a long time, and I’m sure you have missed.”

“Well, hot damn!” he exclaimed, “Have you got beer in that barrel?”

The was a man named George