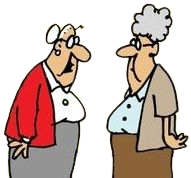 “My son? the poor, poor lad!” sighed the other.

“What an unfortunate marriage he made to a girl who won’t do a stitch of work in the house.

All she does is sleep and loaf and read in bed.

The poor boy even has to bring her breakfast in bed, would you believe it?”

“And what about your daughter?”

“Ah, now she’s the lucky one! She married an angel.

He won’t let her do anything in the house.

He has servants to do the cooking and sewing and washing and leaning.

And each morning he brings her breakfast in bed, would you believe it?

All she does is sleep for as long as she wishes and spends the rest of the day relaxing and reading in bed.”