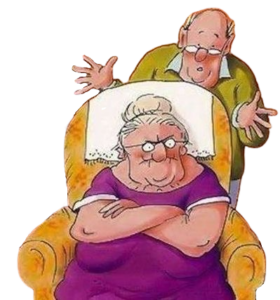 An old man and woman were married for years even though they hated each other.

When they had a confrontation, screams and yelling could be heard deep into the night.

A constant statement was heard by the neighbors who feared the man the most.

“When I die I will dig my way up and out of the grave to come back and haunt you for the rest of your life!”

They believed he practiced black magic and was responsible for missing cats and dogs, and strange sounds at all hours.

He was feared and enjoyed the respect it garnished.

He died abruptly under strange circumstances and the funeral had a closed casket.

After the burial, the wife went straight to the local bar and began to party as if there was no tomorrow.

The gaiety of her actions were becoming extreme while her neighbors approached in a group to ask these questions:

Are you not afraid? Concerned? Worried? that this man who practiced black magic and stated when he died he would dig his way up and out of the grave to come back and haunt you for the rest of your life?

The wife put down her drink and said, “Let the jerk dig. I had him buried upside down.”

A man wakes up home