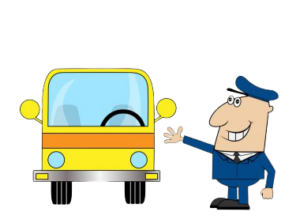 There was once a bus conductor who was a to everyone.

One time when an old lady was getting on the bus, he blew the whistle which resulted in the lady falling off and dying.

The conductor was taken to prison and had to face the electric chair.

The power was turned on but astonishingly, nothing happened.

The process was repeated a few more times but nothing seemed to happen and the jailors assuming the conductor to be a freak of nature, let him go.

Upon getting back his job, the conductor now decided to be good hearted.

The day he got back to his job, a similar situation occured where an old lady was getting on the bus.

While trying to pull her in, the conductor’s hand slipped and this led to the lady’s demise although the conductor had the right intentions..

Arrested once again, the conductor had to face the electric chair. The power was turned on…. The conductor died the second it happened.

One night three of the vampires