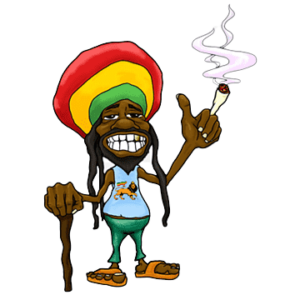 There was a man in Jamaica who had only one . Jamaicans being Jamaicans gave him the street name ‘One stone’.

He hated that name and asked everyone not to call him One stone.

After years and years of torment, One stone finally cracked and said, “If anyone calls me One stone again I will kill them!”

The word got around and nobody called him that any more.

Then one day a young woman named Blue Bird forgot and said, ” Good morning, One stone.’

He jumped up, grabbed her and took her deep into the forest where he made love to her all day and all night.

He made love to her all the next day,

Until Blue Bird died from exhaustion.

The word got around that Onestone meant what he promised he would do.

Years went by and no one dared call him by his given name until a woman named Yellow Bird returned to the village after being away.

Yellow Bird, who was Blue Bird’s cousin, was overjoyed when she saw Onestone.

She hugged him and said, ‘Good to see you, One stone.’ One stone grabbed her, took her deep into the forest,

Made love to her all the next night, but Yellow Bird wouldn’t die!

You can’t kill Two Birds With One Stone

It is 1850 in California where

A man from Alabama He was