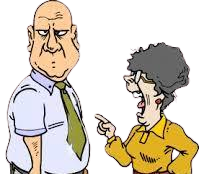 A woman wanted to reach her husband on his mobile phone but discovered that she was out of credit.

She instructed her son to use his own phone to pass across an urgent message to daddy who is at his work site.

After the son had called, he got back to mummy to inform her that it was a lady that picked up daddy’s phone, the three times he tried reaching dad on the mobile.

Women!! She waited impatiently for her husband to return from site, immediately she sighted him, she gave him a very hard slap.

While the man was trying to ask why? She repeated the slap, people from neighborhood rushed around to know the cause of this.

The man asked his son to tell everybody what the lady said to him when he called, son said:

The number u are trying to call is not reachable at the moment. Please Try Again Later.

Kate was standing in the kitchen

She had gained weight