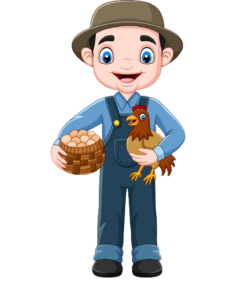 He had several hundred young pullets and ten roosters to fertilise the eggs.

he kept records and any rooster not performing went into the soup pot and was replaced.

This took a lot of time, so she bought some tiny bells and attached them to her roosters. Each bell had a different tone, so he could tell from a distance which rooster was performing. Now, she could sit on the porch and fill out an efficiency report by just listening to the bells.

Sarah’s favourite rooster, old Butch, was a very fine specimen but, this morning he noticed old Butch’s bell hadn’t rung at all! When he went to investigate, he saw the other roosters were busy chasing pullets, bells-a-ringing, but the pullets hearing the roosters coming, would run for cover.

To Sarah’s amazement, old Butch had his bell in his beak, so it couldn’t ring. He’d sneak up on a pullet, do his job, and walk on to the next one. Sarah was so proud of old Butch, he entered him in a show and he became an overnight sensation among the judges.

The result was the judges not only awarded old Butch the “No Bell Peace Prize” they also awarded him the “Pullet surprise” as well.

The German throws a silver spoon

A boy asks a girl to prom