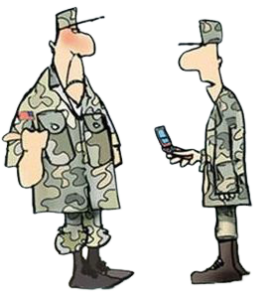 A new recruit arrives on the front lines during world war 2.

The recruit thinks this is the most ridiculous thing he has ever heard but he has no choice so he agrees and heads out.

While on patrol he comes across a German soldier.

A couple of weeks went by and our guy had become quite the crack shot, even having a telescopic sight fixed to his broom.

so he returns to his captain and demands a weapon for close quarters combat. The captain takes a piece of string out of his drawer and tells him to hit an enemy with it and shout “STAB STAB STABBITY STAB”.

He aims again “BANG BANG BANGITY BANG” and again nothing.

The German is getting really close so he takes out his string, but as he swings it out and shouts “STAB STAB STABBITY STAB” the German just runs straight into him, knocking him clear off his feet into a tree and breaking several bones.

As he lies there dying the German slows down and comes back for a look.

He finds our hero lying crushed on the ground asking how this happened. He laughs, turns around and runs off, resuming his shouts of “TANK TANK TANKITY TANK”.