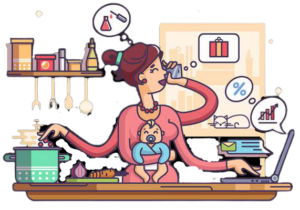 The story began when I was a child I was born as a son of a poor family.

Even for eating, we often got lack of food Whenever the time for eating, mother often gave me her portion of rice

While she was removing her rice into my bowl, she would say “Eat this rice, son

I’m not hungry”. That was Mother’s First Lie.

When I was getting to grow up, the persevering mother gave her spare time for fishing in a river near our house, she hoped that from the fishes she got, she could gave me a little bit nutritious food for my growth.

After fishing, she would cook the fishes to be a fresh fish soup, which raised my appetite

While I was eating the soup, mother would sit beside me and eat the rest meat of fish, which was still on the bone of the fish I ate.

My heart was touched when I saw it I then used my chopstick and gave the other fish to her But she immediately refused it and said “Eat this fish, son.

I don’t really like fish.” That was Mother’s Second Lie.

Then, when I was in Junior High School, to fund my study, mother went to an economic enterprise to bring some used-matches boxes that would be stuck in.

It gave her some money for covering our needs As the winter came, I woke up from my sleep and looked at my mother who was still awoke, supported by a little candlelight and within her perseverance she continued the work of sticking some used-matches box.

I said, “Mother, go to sleep, it’s late, tomorrow morning you still have to go for work.” Mother smiled and said “Go to sleep, dear I’m not tired.”

That was Mother’s Third Lie.

At the time of final term, mother asked for a leave from her work in order to accompany me While the daytime was coming and the heat of the sun was starting to shine, the strong and persevering mother waited for me under the heat of the sun’s shine for several hours.

As the bell rang, which indicated that the final exam had finished, mother immediately welcomed me and poured me a glass of tea that she had prepared before in a cold bottle.

The very thick tea was not as thick as my mother’s love,

When negative people are doing