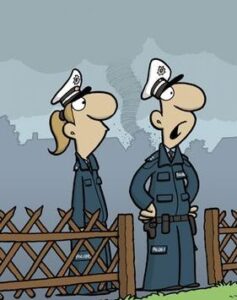 I worked in a German factory a couple of years back.

So one day I was doing my usual inspection and I noticed that one of the lights in the factory had stopped working.

Being helpful, I decided that I would go up and fix it.

I didn’t have a ladder so I called to another worker “hey Hans can you go get the ladder?”

He turned around to his friend (also named Hans) and said

“yeah Hans can you pass me the ladder so I can help him fix the light?”

So he passed the ladder over to me.

So at this point I released that I didn’t even have a replacement bulb for the light.

So I called to a another worker named Hans and asked him, “hey Hans no.3 can you go get me a replacement bulb?”

So he passed me the bulb.

I was almost done, all I needed at this point was for someone to steady the ladder.

Guess what? Another worker named Hans was passing by.

So, I asked “hey Hans can you steady the ladder?”

So the moral of the story really is that Many Hans make light work.

It was anniversary and wife was waiting