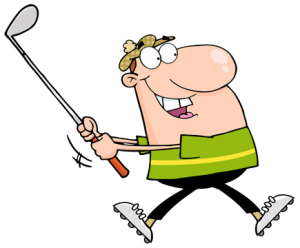 Dylan was practicing his golf swing in his front yard when he swung a little too hard and sent the ball through his neighbors window.

Dylan ran over and rang the doorbell three times.

After no one answered for a few minutes, he opened the door to see broken glass everywhere, a lamp lying on the ground, and a huge fat Arabian man wearing a turban sitting on the couch.

Dylan asked, “Who are you?” The fat man replied, “I am a genie you have freed from that lamp.”

Dylan questioned, “Oh man, do I get three wishes?”

The genie replied, “Since you freed me by accident you only get two and I get one.”

Dylan thought about it and realized what he wanted, “I want to be the best golfer ever.”

The surprised genie said, “You sure? Most people wish for money, but okay. Now your wife gets one wish.”

Dylan brought over his wife who wished right away, “I want a million dollars every week of my life.”

The genie said, “Granted. And now for my wish, I have been cramped up in that lamp for many years so its been a while since I’ve been with a woman.

I want one day of wild, crazy lovemaking with your wife, Dylan.”

The genie replied, “Not even for a million dollars a week?”

Dylan turned to his wife, who said, “I guess for all that, I should. Well, not until Dylan leaves.”

Dylan’s wife then proceeded to have wild make love for the rest of the day with the genie.

When they were finished, the genie asked how old her husband was.

The Genie laughed and said, “Isn’t he a little old to be believing in genies?”

A man asks his wife

His father took him to one side