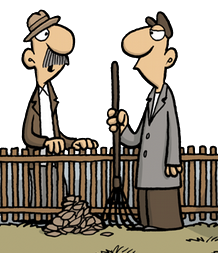 Brian had asked Dave to help him out with cutting his rather large garden hedge after work, so Dave went straight over to Brian’s home.

When they got to the front door, Brian went straight up to his wife, gave her a big hug and told her how beautiful she was and how much he had missed her at work.

When it was time for supper, he complimented his wife on her excellent cooking, kissed her and told her how much he loved her.

Once they were cutting the privet, Dave told Brian that he was surprised that he fussed so much over his wife.

Brian said that he’d started this about six months ago, it had revived their marriage, and things couldn’t be better.

Dave thought he’d give it a go.

Dave was confused and asked why she was crying.

First, little Nigel fell off his bike and twisted his ankle.

Then, the washing machine broke and flooded the basement.

And now, you come home drunk

A senior citizen said to his old buddy

Three men were in heaven discussing