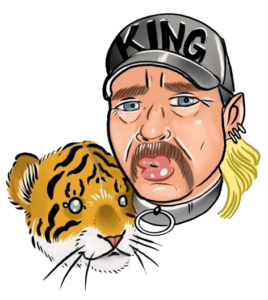 Once upon a time their was a prince who’s name was tiger king.

because when he was born his family made a commitment to the native people that this child is going to kill 100 tigers.

it was also seen that he started speaking when he was 6 month old.

As the time passed he killed 50 tigers of his locality and now all tigers were extinct so he married.

a princes of other kingdom so that he can get to kill tiger of her kingdom.

so he managed to kill 99 and one summer day a hunting was planned for his 100th tiger that.

a tiger will be given a prey and king will shoot from behind the tree .

but unfortunately he missed the shot and the tiger ran inside the forest.

So they went home and in the evening tiger king was playing with his sons wooden tiger and accidentally a metal spike went inside his finger and he died .

A simpleton was canvassing a wealthy