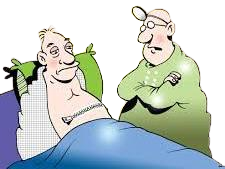 In Korea, when a patient is taken to hospital, a white wristband is placed on their left arm.

These wristbands contain the patient’s name and information.

When a patient dies, a red wristband is placed on their right arm and they are taken to the morgue.

In one particular hospital in Korea, a young doctor was working the night shift.

It was around 2 AM when he finished his last operation.

He was on the 5th floor and pressed the button for the elevator.

The doctor was tired after a long day and was looking forward to the end of his shift.

At 2 AM, the hospital was very quiet.

Most of the patients were asleep and many of the nurses had already gone home.

He entered the elevator and there was just one other person there.

He casually chatted with the woman while the elevator descended.

The elevator stopped at the basement and the door opened.

They saw an old man dressed in a white gown standing there.

The old man was about to get in when the doctor suddenly slammed the close button and punched the button for the 5th floor.

“Why did you do that?” asked the astonished woman.

“I’ve performed a lot of operations,” replied the doctor.

“I’ve seen a lot of people die. When a patient dies, they get a red wristband placed on their arm.”

The woman was silent.