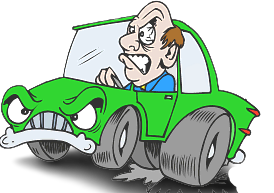 A man has been driving all night.

He decides to stop in the next town for a few hours and get some sleep.

As luck would have it, he pulls up by a park frequented by early morning joggers.

No sooner has he settled back to get some shut-eye when a jogger starts knocking on his window.

The jogger says his thanks and leaves.

The man settles back again, but just as he’s dozing off there’s another jogger knocking on the window. ‘Excuse me, sir.

Do you have the time?’ asks the jogger.

‘8.25!’ snaps the man to prevent any more interruptions the man writes a note saying ‘I do not know the time!’ and sticks it to his window.

He settles back but is disturbed by yet another jogger knocking on the window. ‘Excuse me, sir,’ says the jogger. ‘It’s 8.35.’