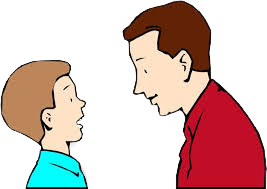 A young man went to his father one day to tell him that he wanted to get married.

His father was happy for him.

He asked his son who the girl was, and he told him that it was Pamela, a girl from the neighborhood.

With a sad face the old man said to his son, ‘I’m sorry to say this son but I have to.

The girl you want to marry is your sister, but please don’t tell your mother.’

The young man again brought 3 more names to his father but ended up frustrated cause the response was still the same.

So he decides to go to his mother.

‘Mama I want to get married but all the girls that I love, dad said they are my sisters and I mustn’t tell you.’

His mother smiling said to him, ‘Don’t worry my son, you can marry any of those girls. You’re not his son !!

A woman stands in front of the mirror

Harry and Sheila were having dinner