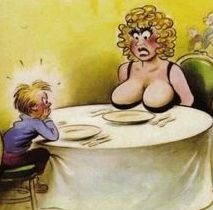 Garth and his wife Sadie are having dinner at an upmarket restaurant in Melbourne, when an attractive young redhead walks by, smiles at Garth and says, “Hello Garth.”

Sadie immediately asks, “And who was that girl who just spoke to you?”

“You have a mistress? I don’t believe you. How long has this been going on?” says Sadie.

“About ten years, on and off.” answers Garth.

“Now hold on Sadie,” responds Garth, “just think about it for a minute. If we get a divorce, you will only get only half of what we have together now.

You won’t have our big house in Homestead, you’ll no longer get a new Lexus as your birthday present from me each year, you won’t be able to play golf all day with your friends, you won’t …”

But before Garth can continue, a blonde walks past and says to him, “Hello, nice to see you again.”

Sadie asks, “And who was that, another of your ‘girls’?”

“You mean that Harry also has a mistress?” says Sadie, surprised.

Garth answers, “Of course, she’s been with him for nearly twelve years.”

Sadie then says, proudly, “I like ours a lot better.”

Tell the court why you want a divorce

He stormed into the kitchen