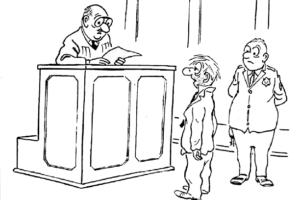 Judge: “You are accused of beating your wife to death. If you want to expect any mercy, you’ll have to give us a good reason.

” Man: “She was so stupid, I just had to kill her.” Judge: “That is even worse. If you don’t want to be declared guilty on the spot, you better give us a plausible reason.

” Man: Well it happened like this. We live in this apartment complex and the property manager lives in the first floor with his family.

The kids all have a growth deficiency. So one day, my wife comes up and says: Those little kids, they look like pyrenees. So I say: You mean pygmy.

“No”, says my wife. Pygmy is what you have under your skin, it causes freckles. “That’s pigment”, I say. So she says “No, pigment is what the ancient Romans were writing on.”

I sigh and say: “No, that’s parchment!”. “No”, says she, “parchment is an unfinished sentence”. “Your honor, you can imagine, I swallowed the ‘fragment’, I got back to my armchair and my newspaper.

But then suddenly she’s back with a book, and she says: I should know, I got a legionnaire for my french lessons. I say: “You mean a lector”.

“It’s a duet” She replies, “No, that’s when two men are fighting with a saber.” “That’s a duel”, I say. “No, a duel is where a railway goes through a mountain!”

Well, your honor, so I took a hammer and beat her to death… There was a long silence, shocked faces. Finally the judge says: Not guilty. I would have killed her at “Hector”.

A crocodile swims out to rescue

A bunch are sitting around in prison