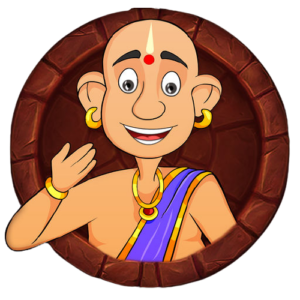 The villagers were delighted. A sadhu who performed miracles, had come to their village.

Every morning and evening they would gather at the temple with specially prepared delicacies as offerings to the sadhu.

When Tenali Rama heard of this, he smelt a rat. He went to the temple and sat near the holy man.

The sadhu began reciting shlokas. To Rama’s surprise, he went on repeating the same shloka over and over again.

Rama realized that he was a fraud. Suddenly, he leaned forward and plucked a strand of hair from the sadhu’s beard.

“I have the key to Heaven!” he shouted triumphantly. The villagers looked startled.

“This sadhu is so great that if I keep the hair from his beard with me, I will be blessed forever!” said Rama.

Immediately there was a scramble as the villagers rushed to get hold of a hair from the sadhu’s beard.

The frightened sadhu ran for his life and was never heard of again.